Exhibition - The Armoury of St. James's: Bulletin No. 51, The Art of War 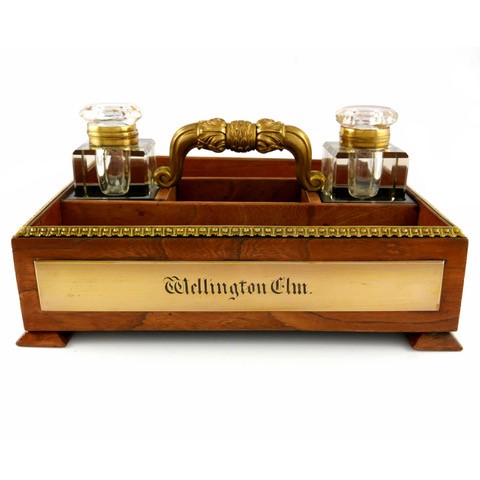 Autumn highlights will include artefacts from the battle of Waterloo to the Battle of The Atlantic.

Online and at 17 Piccadilly Arcade from the 11th October.

Ormolu mounted Waterloo elm with glass inkwells. Of rectangular open box form with, compartmented interior and central scrollwork carrying handle, the outer sides applied with gilt bronze plaques, the first inscribed in gothic script, ’Wellington Elm’; the second, ‘This Box is formed out of the Elm Tree which stood behind La Haye Sainte & close to which England’s great Captain / frequently took his Station during the famed Battle of Waterloo, it must therefore be considered as surpassing in fame every / Tree of the Forest & was purchased by Mr Children who kindly gave this piece of it to’ [signed in facsimile] M. Rutland’. 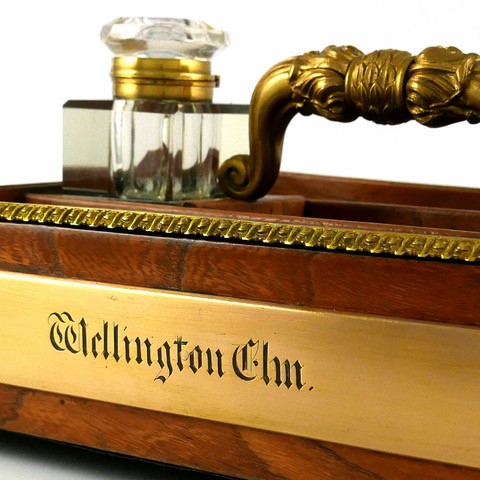 Within three years of the battle the famous Waterloo elm tree had been stripped almost bare by souvenir hunters. In 1818 its remains were saved by the English polymath John George Children (1777-1852) who purchased it from the farmer on whose land it stood and brought it to England. As a recently elected Fellow of the Society of Antiquaries, the tree held a special allure to Mr Children. He commissioned Thomas Chippendale the Younger to make  a Waterloo chair from it for presentation to George IV at Carlton House in 1821. The scarcity of the hallowed timber and George IV’s inclination to regard the vanquishing of Napoleon as a personal victory ensured its acceptance into the Royal Collection as a fitting tribute. A small number of other items were made from the dismembered elm. The most important of these were a chair for the use of John George Children himself, which he originally intended to bequeath to his daughter Anna, but in 1837 gave to the Duke of Wellington. It remains in the Apsley House collection. Timber for a third chair was given by John Children to his Eton and Cambridge contemporary John Henry Manners, 5th Duke of Rutland who ordered it to be made into a chair for the Regent’s Gallery at Belvoir Castle. The furniture historian Geoffrey de Bellaigue, suggests that it was perhaps this gift that prompted the Dowager Duchess of Rutland to ask for and to receive ‘a small piece for herself’. ‘it is particularly interesting to me,’  she wrote to John Children in response, ‘as one of my sons commanded the 10th Hussars in the battle; and receiving the wood from you, given me now in so obliging a manner, enhances the value of it still more.’ 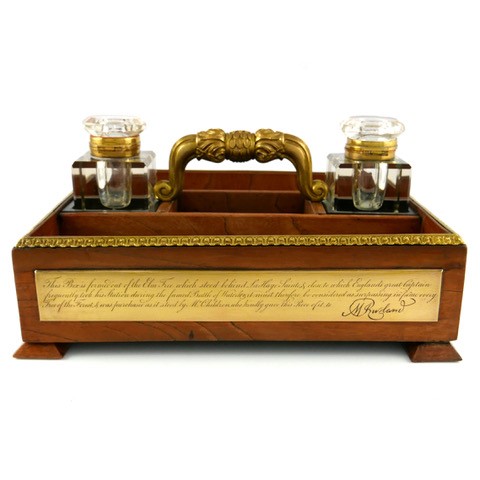 Mary, Dowager Duchess of Rutland (1756-1831) was a daughter of the 4th Duke of Beaufort. A celebrated Georgian beauty, renowned for her elegance and good taste, she married Charles Manners, 4th Duke of Rutland in 1775. She was a prominent society hostesses and campaigned for William Pitt in the absence of her husband in his role as Viceroy of Ireland. Widowed at the age of thirty-one in 1787, she was the mother to six children including the 5th Duke (1778-1857), who was John George Children’s ‘old college friend’ and a Trustee of the British Museum, where Children was employed after the failure of his family’s bank in 1816.

The Duchess’s son who commanded the 10th Hussars at Waterloo was Lord Robert William Manners (1781-1835). He was a member of the of the Prince of Wales' set and was numbered among the financial supporters of their friend ‘Beau’ Brummell, during his long exile in France. In later life he became a Major-General and represented various constituencies of the family interest in Parliament from 1802. He died suddenly at Belvoir Castle, Leicestershire, and was interred in the estate's mausoleum.

John George Children is an intriguing figure. Educated at Eton, Tonbridge School and Queen’s College, Cambridge, he was the son of a banker who was forced to seek gainful employment at the failure of the Tunbridge Bank in which the family fortune was sunk. Twice widowed, he was found paid employment as Librarian in the Department of Antiquities at the British Museum through the efforts of 1st Marquess Camden. He was subsequently Keeper of the Zoological collections and a Fellow of the Royal Society from 1807, thereafter becoming Secretary of the Royal Society, Vice-President, 1837-8, and a Fellow of the Royal Society (Edinburgh) in 1812. He was President of the Entomological Society and a recipient of the Royal Institution Gold Medal, 1828. Moreover he published notes on electricity, translated chemical tracts and was a friend of Sir Humphrey Davy, who made frequent experiments in his laboratory at Tonbridge.