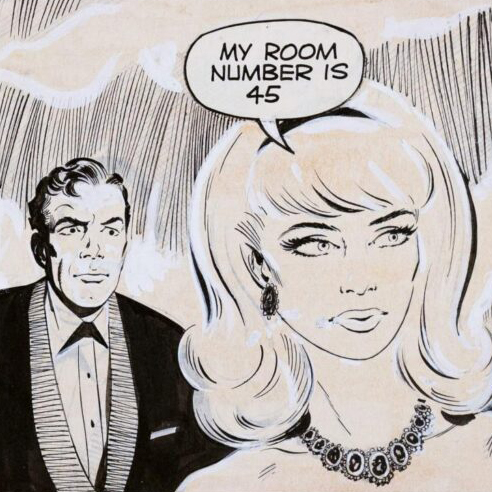 On July 7th 1958, almost four years before Sean Connery would star in ‘Dr No’, Daily Express readers in the UK got their first sight of James Bond. Difficult as it is to imagine now, the face John McLusky created would be many people’s first and lasting image of 007; it was his Bond that composer John Barry had in mind when writing the original theme tune.

Although initially reluctant, Ian Fleming had been pursuaded by Edward Pickering, then Editor at the Daily Express, to grant the paper permission to create a syndicated series of comic strips based on his novels. John McLusky, who had made technical drawings for Air Force Bomber Command in WWII, happened to be touting for work in Fleet Street. In the right place at the right time, he was asked to supply a sample strip, and won the contract.

Keeping to an intense schedule of one strip a day, six days a week, McLusky would eventually illustrate thirteen of Fleming’s novels and short stories for the Daily Express between 1958 and 1966 (we have drawings for eleven of these in this Exhibition), and five for the Daily Star bewteen 1981 and 1983. The stories were visualised almost chronologically. ‘Casino Royale’, the first, was adapted by Daily Express staff writer Anthony Hearne. Then, for the next seven years McLusky teamed up with writer Henry Gammidge (there was a one-off partnership with Peter O’Donnell for Dr. No in 1960).

Fleming was concerned that his detailed prose wouldn’t transpose well to the format. But the strips were an instant success and boosted sales of the newspaper. The flow of the stories, only read at a rate of three cells a day, kept readers hooked; the punchy, fast-paced style and daily cliff-hangers suited Bond’s adventures perfectly.

Trouble broke out in 1962, when Fleming published his short story ‘The Living Daylights’ in rival newspaper The Sunday Times. Lord Beaverbrook, the Daily Express owner, abrubtly curtailed the publication of ‘Thunderball’, then only two months into syndication. It was not until 1964 that a settlement was reached, allowing the Daily Express to continue publication of the strip and all Fleming’s other works.