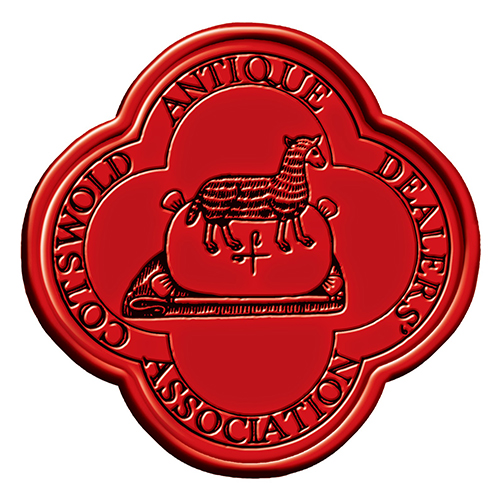 Legge Carpets has an early French wool and silk tapestry panel dating to around 1600, priced in the region of £7,000. Another highly decorative 18th century wool and silk tapestry panel depicts an idyllic river complete with bridge, castle, people boating and enjoy the water, which you could enjoy spending time deciding upon the story behind all the characters, £4,800.

Architectural Heritage brings Germination 1980 (Opus 405) by Robert Adams (1917-1984), a bronze sculpture on a wooden base, signed and dated 1980, edition 1 of 6, £15,800 plus ARR. Sarah Colegrave brings A Cotswold Stonebreaker by Charles March Gere RA, RWS (1884-1963), £4,000. This oil on canvas shows the Painswick stonemason, Percy Musty, accompanied by his dog Patch. He is shown working on the wall of building near Paradise, a small hamlet about half a mile north of Painswick. There is a study for the painting in a private UK collection. Although exhibited at the Royal Academy, London in 1938 (no. 671), it seems likely this is the earlier painting known as The Stonebreaker, exhibited at the Birmingham Group Exhibition in 1919 (no.133) and at the Cotswold Gallery in 1921 (no.3).

Russell Strachan of Strachan Fine Art said, “Because we all need a little cheering up, I plan to show a variety of paintings, drawings and sculpture of differing dates but all with an element of humour.” Amongst the humorous art for sale are A nymph and satyr mocking an elderly satyr, a pair of bronze reliefs by Charles Sargeant Jagger (1885-1934), £35,000 the pair, early illustrations by William Heath Robinson and work by William Kidd, Rowland Emmett, Michael Ayrton, Martin Honeysett, William Rushton, Axel Krut. There will also be several illustrations by Ronald William Fordham Searle (1920-2011) including The Geyser, a boarding house drama, pen & ink & wash, an illustration for Le Figaro, signed and dated 1955 and inscribed with the title by the artist, £6,400.

Entry to the fair is free for ticket holders. To register for a complimentary ticket for two people, simply visit and sign up at www.thecada.org or email. Antiques fair ticket holders can purchase an upgrade ticket to visit the Compton Verney collections at a special price of £7.50 during the fair.