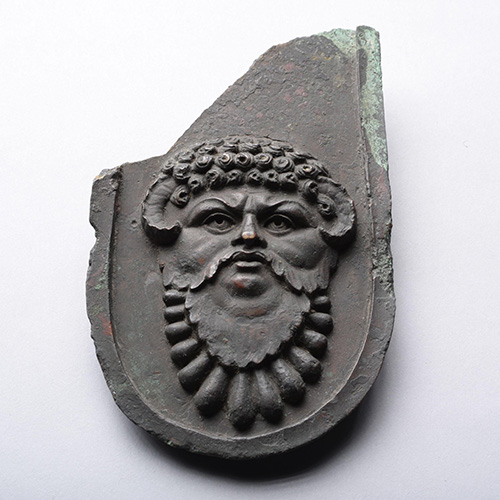 For BADA Week 2022, ArtAncient have chosen to feature this exceptional Fragment from an Over Life-Size Roman Imperial Statue, 1st - 2nd century AD.

An extraordinary bronze fragment from the cuirassed statue of a Roman Emperor, an important genre of official portraiture depicting the princeps in a highly decorated muscled cuirass with allegorical and mythological imagery. Offering a particularly beautiful depiction of the Greco-Egyptian god, Zeus- or Jupiter-Ammon, this lappet was part of a row of metal tongue-shaped ornaments, or pteryges, hinged onto the lower edge of the cuirass.

Staring out with large, deep-set, round eyes from under a furrowed brow, his long, thick beard with foliate edges, framed with thirteen rounded lobes, two curling ram’s horns emerging from under rows of thick, bushy hair make the attribution immediately clear. An exceptionally sculptural and finely modelled piece, the superior workmanship shows a great amount of technical and artistic skill, 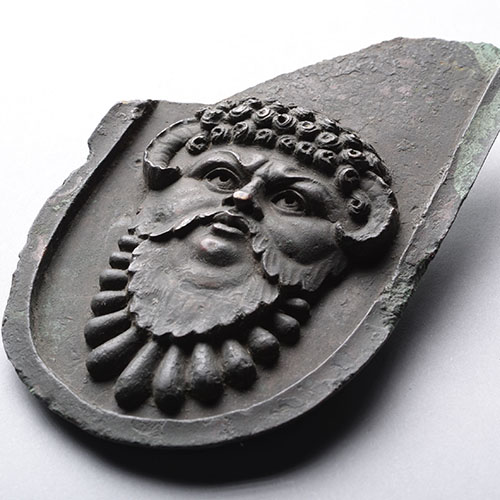 indicating that this fragment originates from a very high-quality Imperial statue.

From the collection of Louis-Gabriel Bellon (1819-1899), Saint-Nicolas-lez-Arras and Rouen, thence by descent.